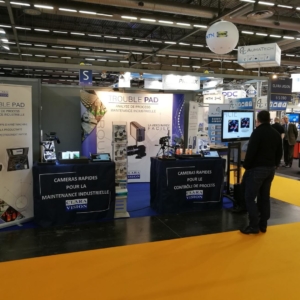 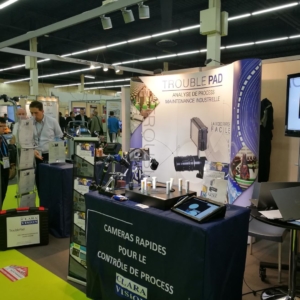 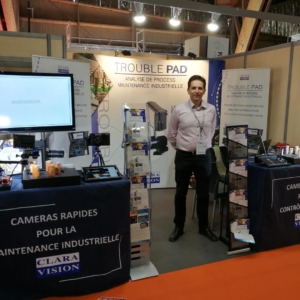 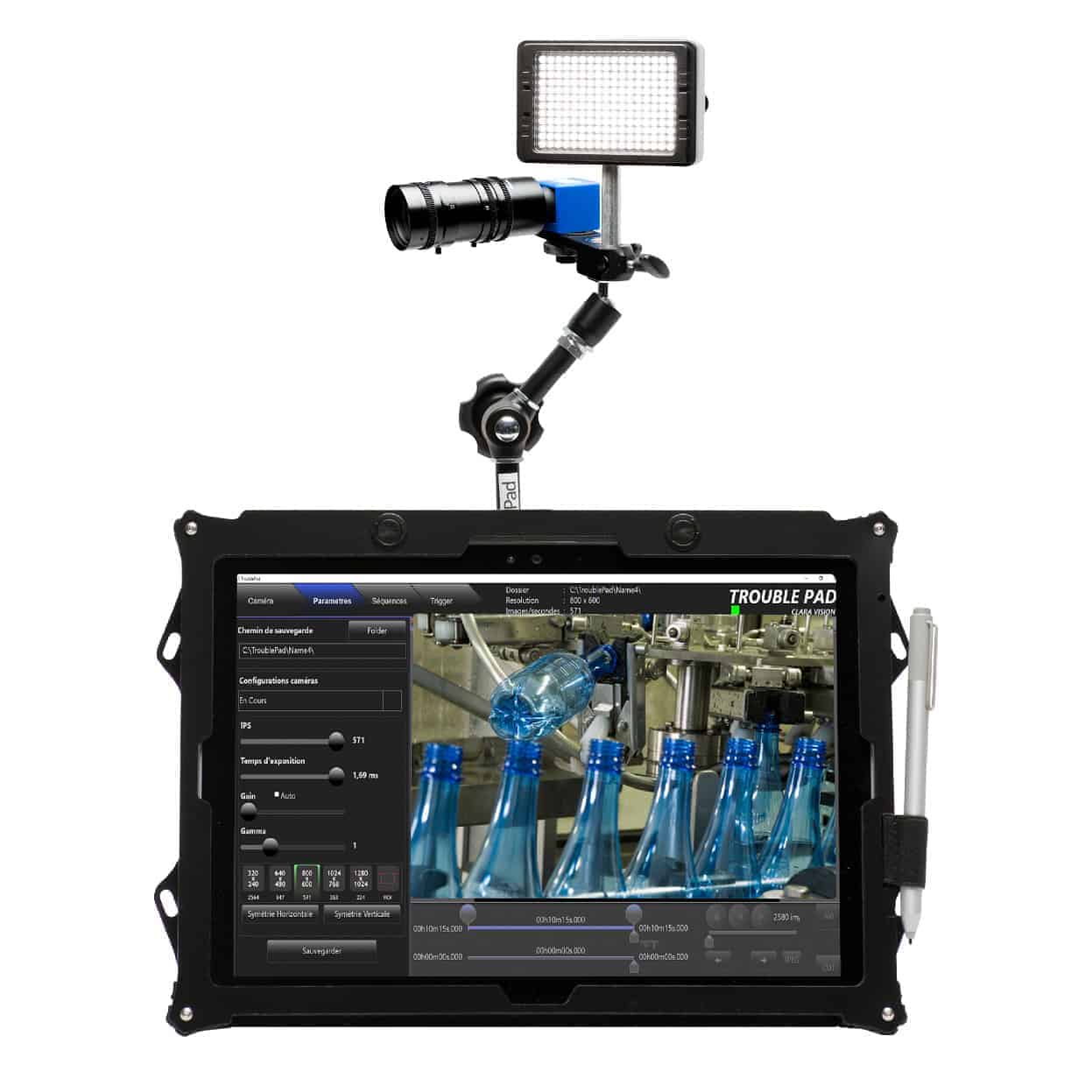 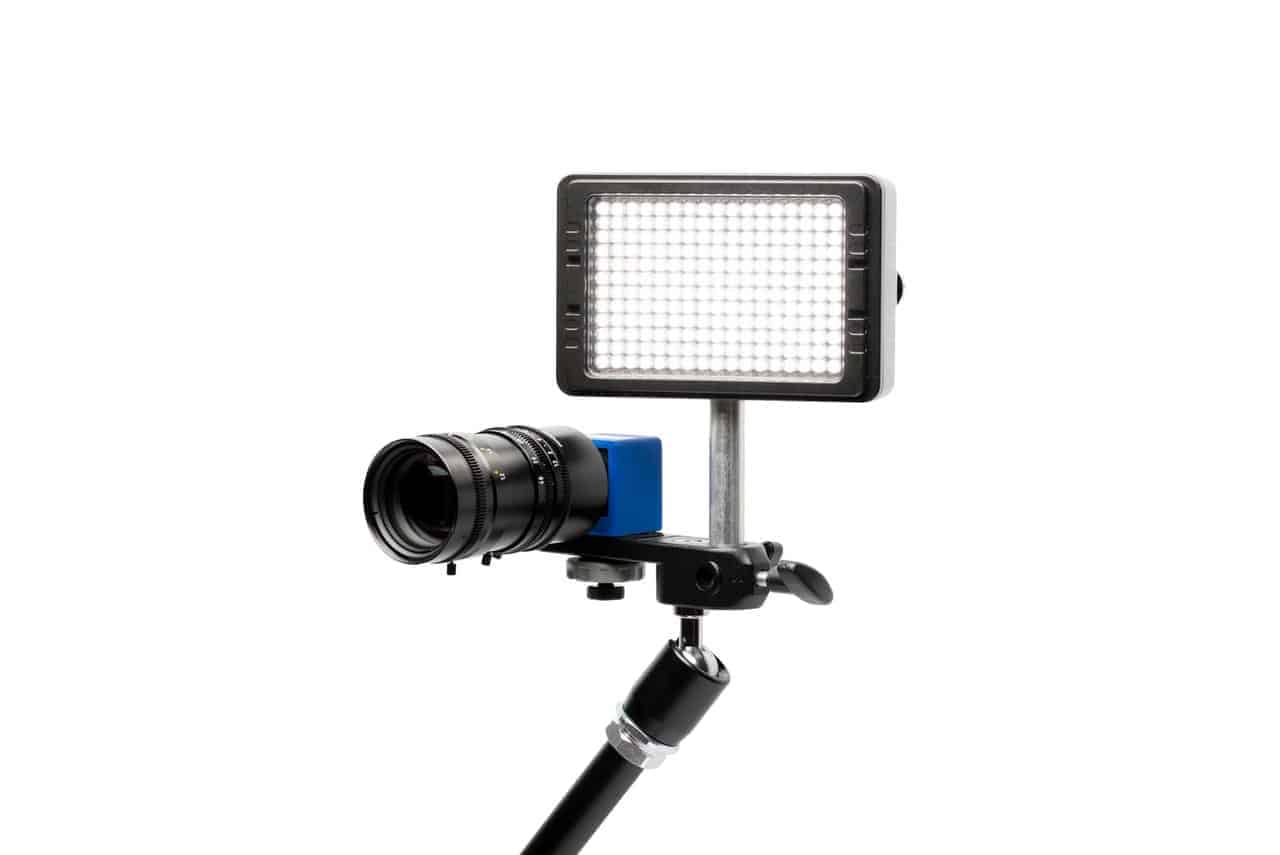 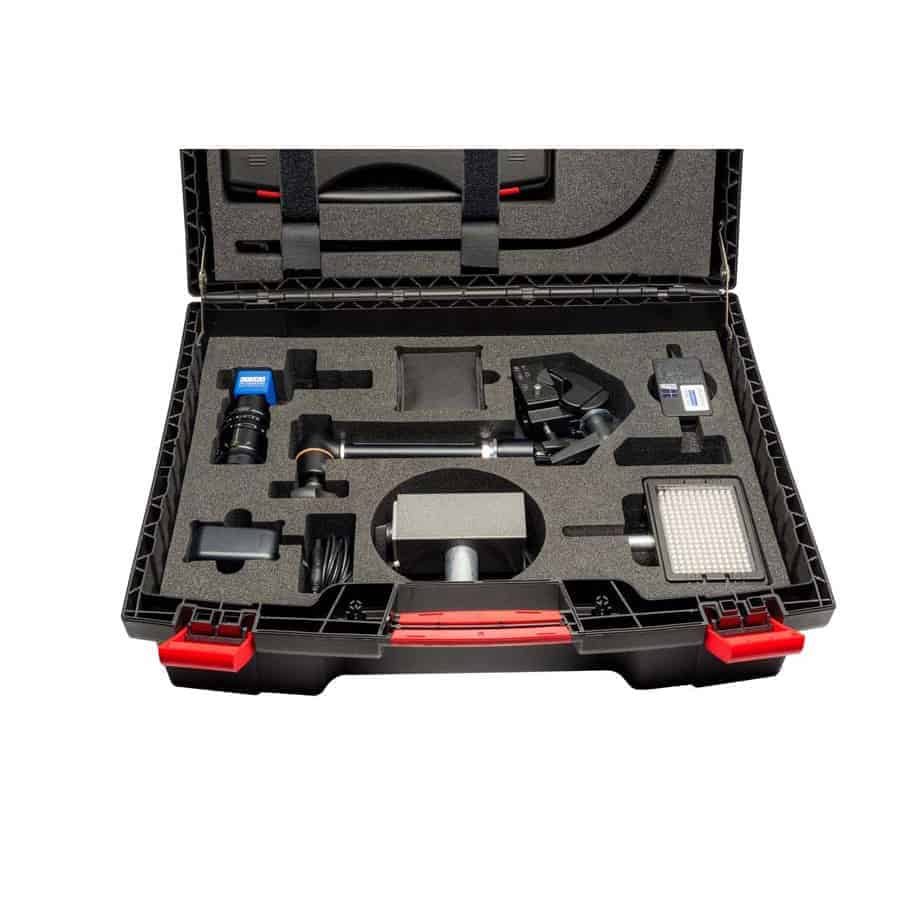 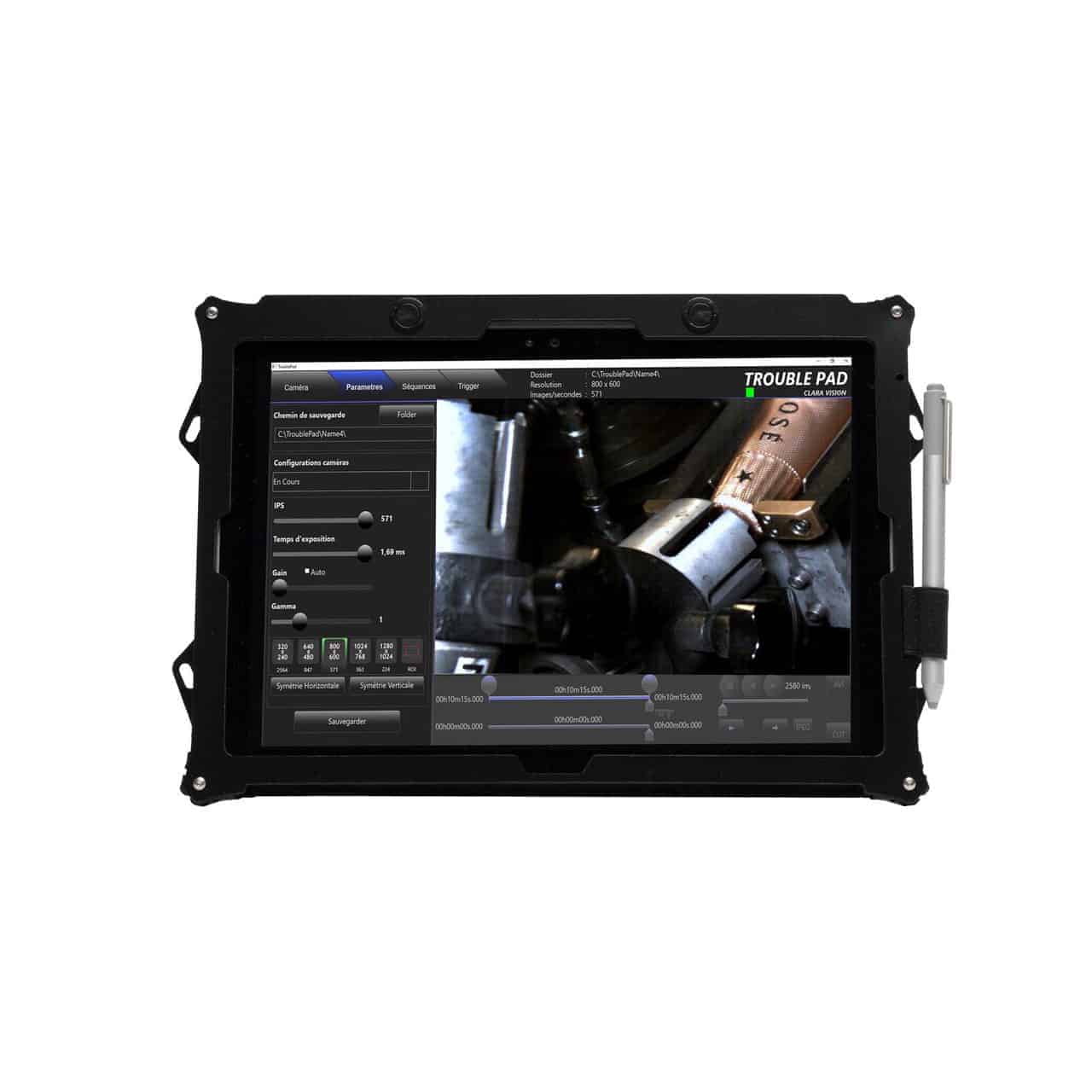 TroublePad is a high speed camera solution that enables the identification of production line improvement points. It can be used alongside your existing industrial monitoring system. Easy to use and intuitive, our ultra-portable high speed camera system was created with industrial maintenance in mind. It will enable you to diagnose and understand the anomalies and defects in your production line and high speed machinery.

The TroublePad is aimed at industries that run production lines, such as the food industry, cosmetics, packaging or pharmaceuticals, etc.

Easy to install, practical to use

Our development departments and our customers' personnel worked together to create the TroublePad, which is designed to facilitate maintenance and optimisation of industrial processes in any field (food processing, pharmaceuticals, bottling, manufacturing, packaging, cosmetics, automotive, paper, electronics, etc.).

What is TroublePad made up of?

The ultra-compact system consists of a high speed camera unit, a tablet with pre-installed software, a mounting arm and a convenient carrying case (9kgs).

It only takes seconds to install, even in the most confined spaces. It is fully mobile thanks to its integrated, directional LED lighting, with no unnecessary wires or power supply (approx. 2 hours stand-alone operation).

A power connection is required when TROUBLEPAD is used to capture a random event which, by definition, could occur at any time over a period of hours or even days...

The TroublePad comes complete with preinstalled software on a touchscreen tablet.

Its intuitive user interface enables you to control recordings, visualise live images, see footage history and enjoy instant replay at slow speed so you can understand production line errors, which are usually impossible to detect with the naked eye, in real time.

The system also enables videos to be exported in AVI format.

Thanks to this intuitive camera you will be recording your first images just a few minutes after installation.

The TroublePad is an adaptive, intelligent, high precision device for optimal industrial vision.

It can be used as a complement to an existing industrial vision installation or as the sole monitoring device.

With the camera and TroublePad system, you can set recording speeds from 225 to 2,500 frames per second, and make operator-controlled and configured loop recordings of several hours' duration.

The (optional) Trigger Box provides control over the system and gives it autonomy.

The Box enables you to:

You therefore only keep the most essential recorded images. The Box has the added advantage of quickly identifying areas for improvement in the production line, preventing problems more effectively, and helping you to find solutions for each one.

With the Box, the TroublePad becomes a completely standalone device: the images that are filmed are automatically recorded, without the need for human intervention. It provides the system with an extra dimension.

From a technical point of view, the TroublePad system is extremely efficient and meets several types of requirements.

The recommended camera speed is 570 fps with a resolution of 800x600 pixels.

The camera is also equipped with a LED light unit, which can operate on batteries (5 AAA batteries) and power packs. It produces 600 lumens.

The optics include a housing with a macro zoom lens to ensure maximum precision when recording.  The mounting arm supplied is a magic arm with an adjustable clamp. It adjusts to the camera and its lighting system.

Our system also includes a 12-inch tablet with a powerful Intel Core processor, 8 gb RAM and a 256 gb SSD hard drive, which comes with a protective case and shoulder strap.

For those who require extra storage space, it is possible to select a tablet with a 512GB or 1TB hard drive. The larger capacity tablets can handle longer recording loops.

The very powerful software can record at several speeds, several resolutions, under operator control or independently (with the Box).

Several system accessories are available such as: 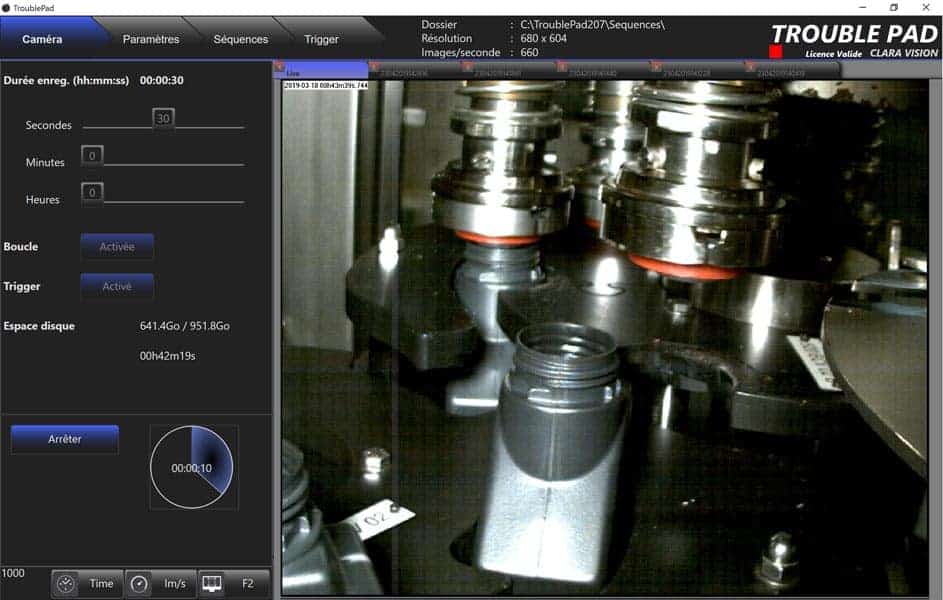 The operator will be ready to record sequences using the high speed camera in a matter of minutes. 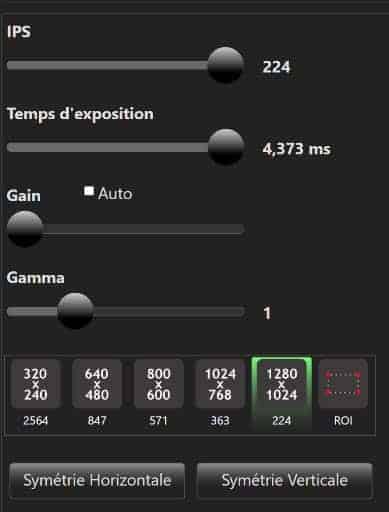 It is very easy for the operator to define a specific area of interest in the image, so as to only retain the most relevant part.

Loop recording (loop duration is defined by the operator) enables continuous recording for several hours, and recording can be stopped either manually by the operator or automatically by an external "machine" trigger. 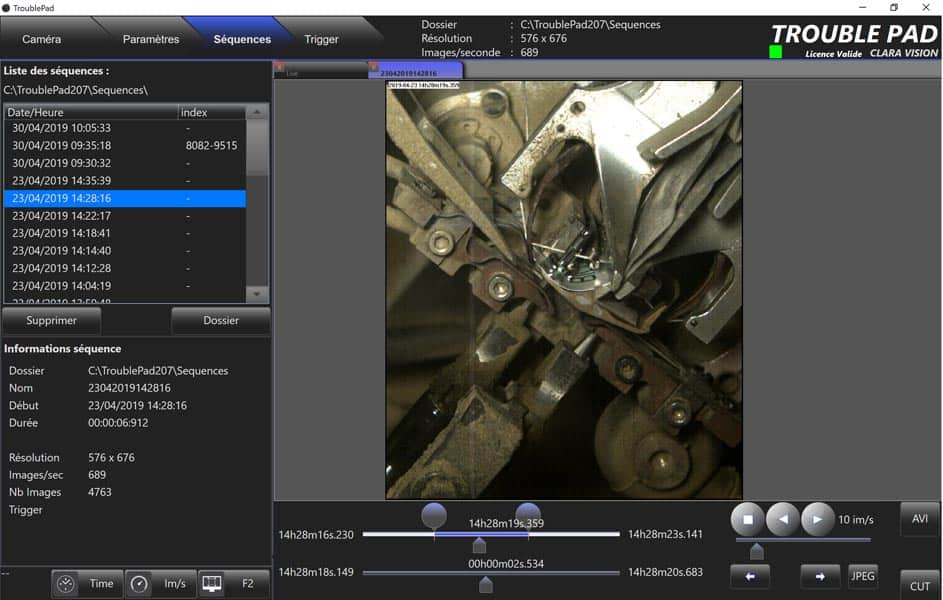 The sequences that are filmed by the TroublePad high speed camera are automatically recorded, without operator interaction. The stored sequences are easily accessible for review and analysis, with ajustable playback speeds. 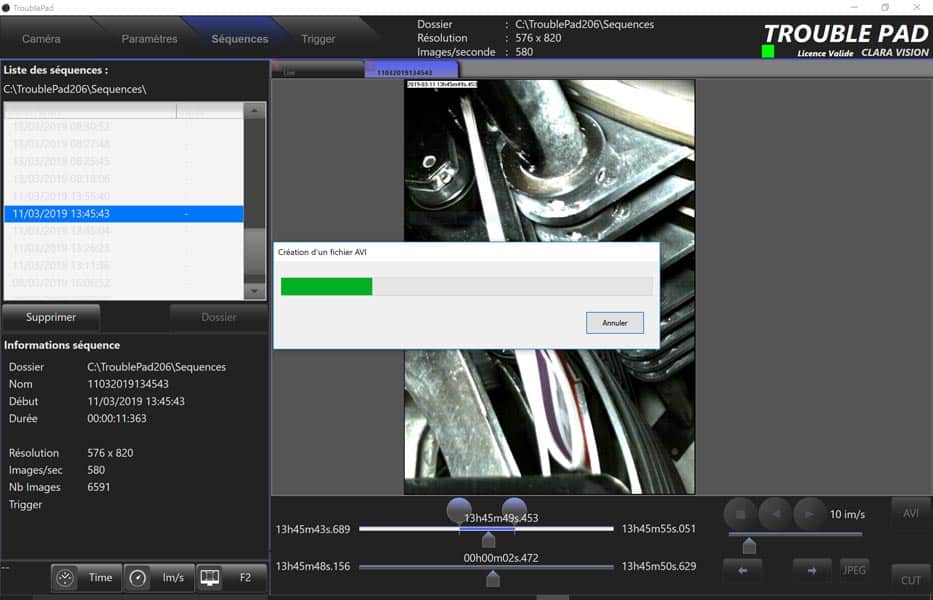 It is very easy to isolate a sequence so as to keep only the most relevant part. An AVI file is created at the click of a button, at a frequency defined by the operator.
Ease of use and efficiency are our bywords!

Controlling the system through external triggers 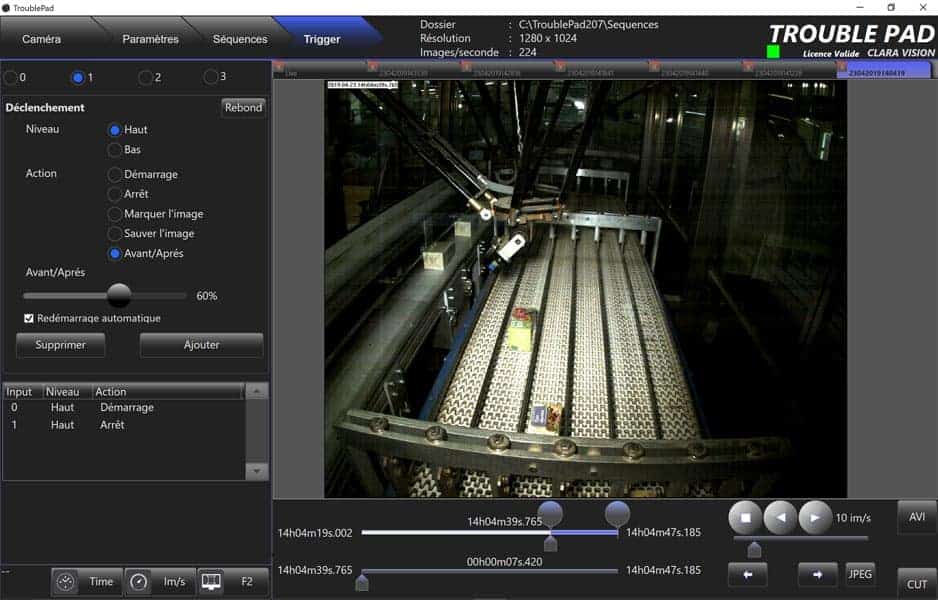 As an option, the TroublePad high speed camera can be set up as a slave to your production line and/or robots!

TroublePad's trigger box can be used to start and stop recording, to mark key frames, to retain a few seconds before and after your sensors' signal....

Using the trigger box will help you to easily spot and solve random and infrequent events on your production line.

The TroublePad camera acts as a real "watchdog" for you production line. 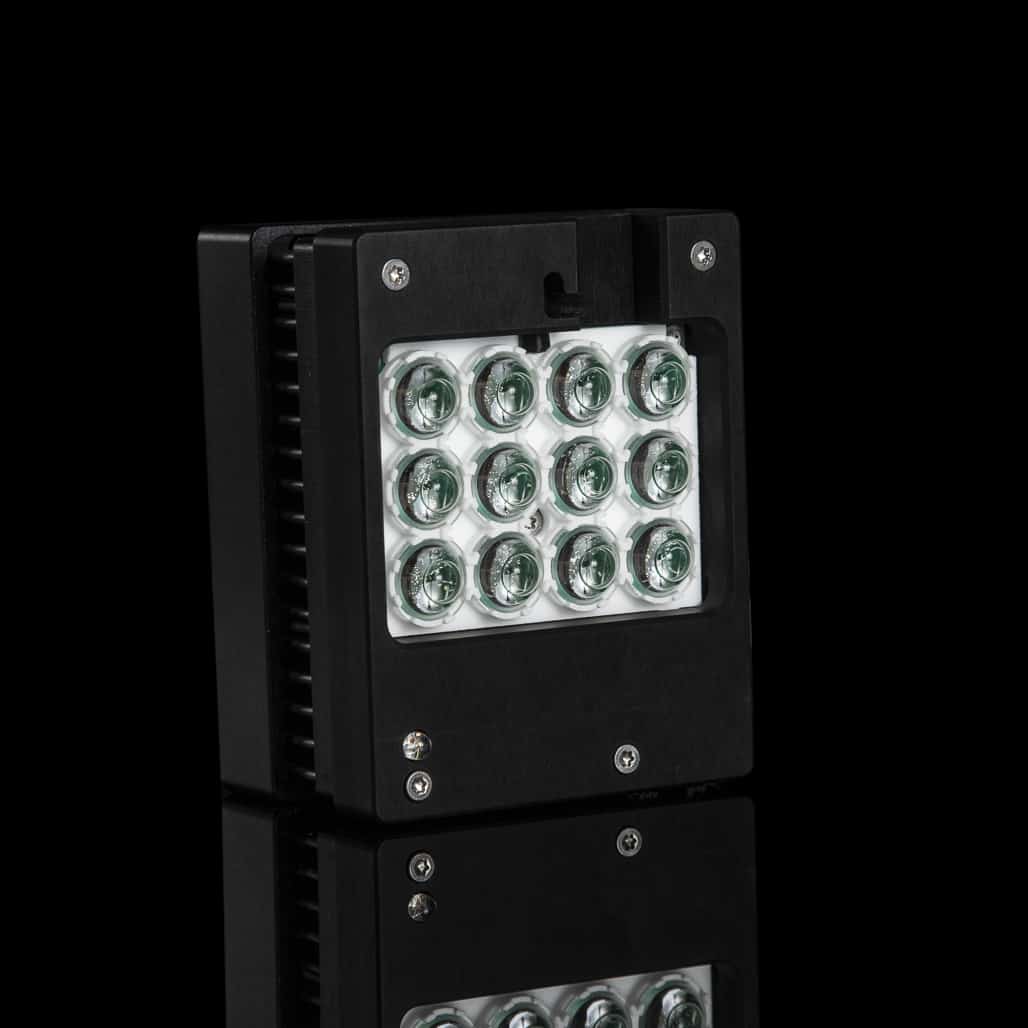 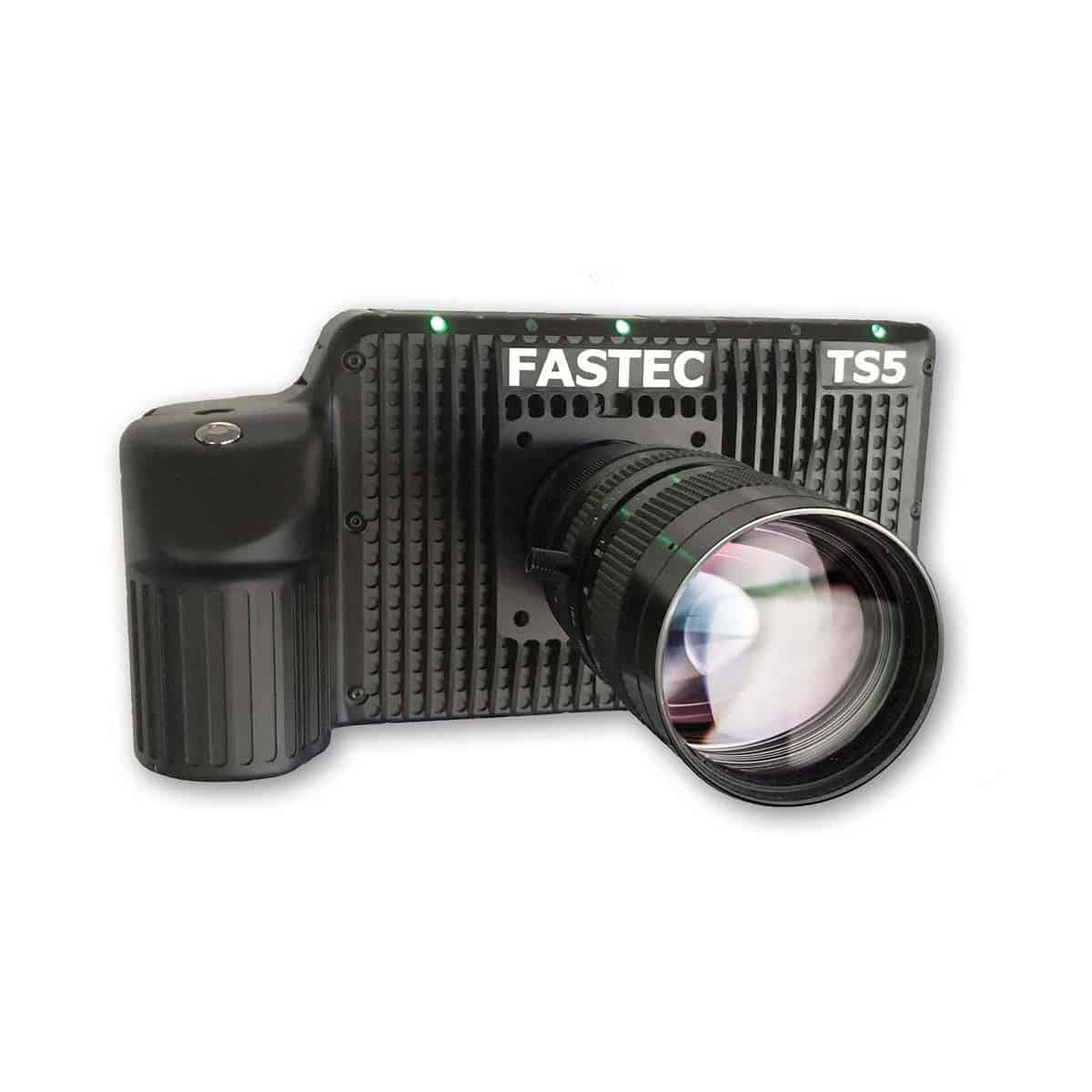 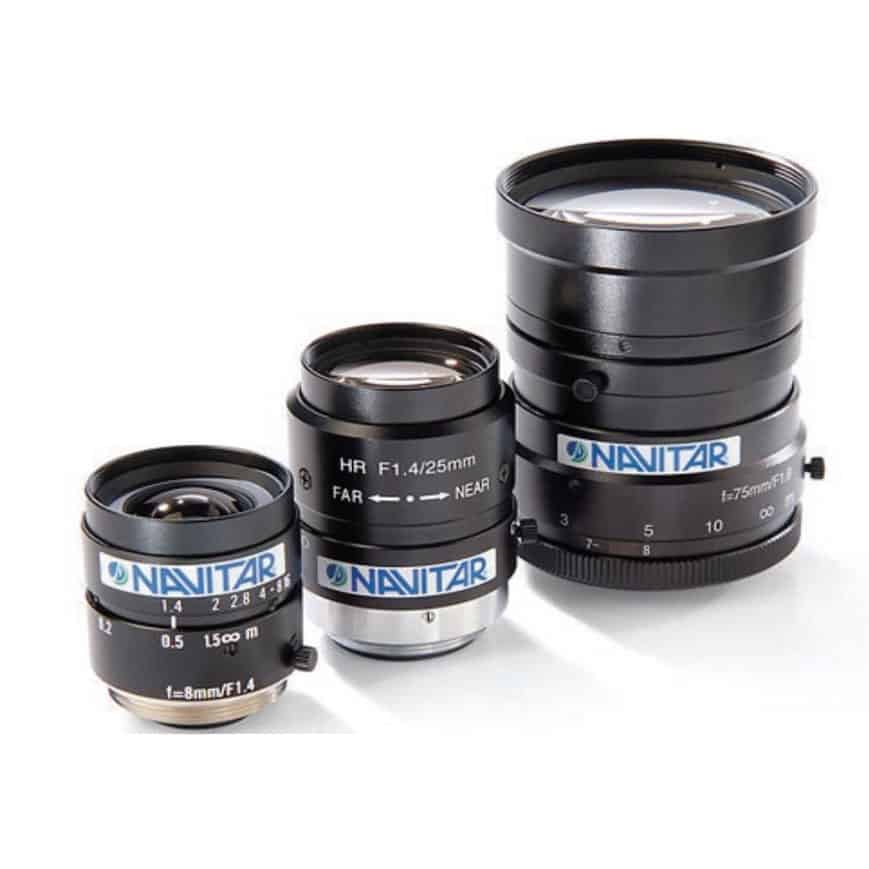